Food Allergies in Babies: What Every Parent Needs To Know 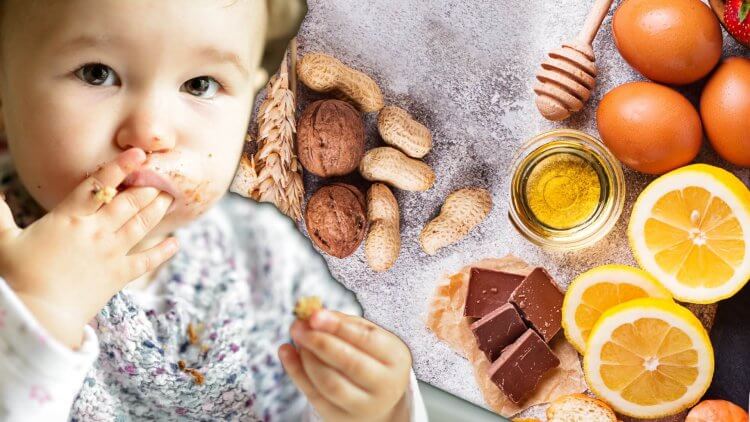 When I was pregnant with Griffin eight years ago, the collective advice was to avoid allergenic foods if you want to prevent your child from having food allergies. Fast forward eight years later to my third pregnancy, and the recommendation is the exact opposite.

Well, it’s not just your imagination that it seems like more kids have food allergies these days. Researchers found these avoidance diets were actually increasing the incidences of food allergies in babies, peanut allergies in particular.

There have been three landmark studies in particular that not only offer hope, but have also prompted this huge change in the recommendations surrounding food allergies.

What the most recent research says about food allergies in babies

As a result of this, there’s a whole new philosophy when it comes to food allergies in babies. The FDA, the National Institutes of Health, and the American Academy of Pediatrics have all updated their guidelines to support the science behind early and sustained allergen introduction.

Note: Although many guidelines suggest you can begin introducing allergens as early as four months, there are plenty of reasons to wait until six months to do so. Read more about when to introduce solids.

How to Introduce Allergens

So how exactly do you introduce allergens to babies?

Certain proteins in breastmilk can help prevent food allergies in breastfed babies. In fact, a 2018 study revealed that mother’s milk was able to reduce food-related anaphylaxis by helping the offspring tolerate the allergy. (source)

You need to introduce all eight of the most common allergens to baby, but you shouldn’t introduce them all at once. Why? If your baby does have a reaction to a certain food, it’s hard to pinpoint which food caused the reaction. Wait at least three days between introducing new foods.

Consider using a program that can help you safely and effectively introduce allergens. I recommend Ready, Set, Food!, an allergist-developed system that allows you to gradually and gently introduce your baby (by mixing powder into breast milk or your baby’s bottle) to peanuts, eggs, and cow’s milk. It’s a really simple way to do it—you don’t have to worry about whether you’re introducing the right amount or calculate your own timeline, since everything is pre-portioned and ready to go. You can read the full review here.

Talk to your pediatrician

The studies all demonstrate that starting early is much more beneficial than waiting until 11 or 12 months of age. Delaying introduction past this timeframe increases the risk of food allergies in babies. That said, no two babies are exactly the same, and your pediatrician can help you determine what’s right for your child if you have any concerns.

Have you tried early introduction? What worked (and what didn’t)? Have you tried a program instead? Share your experiences below!