What To Do When People Think You’re Nuts

What do you do when your natural way of living becomes a joke or even a threat to your family and friends? Here’s how I handle it. Question from reader Nicole: What do you do when your natural way of living becomes a joke or even a threat to your family and friends?

I have been there, mama! Many times.

Here’s what I’ve learned along the way.

Here’s a transcript of the video:

Nicole, and her and her husband have a 16-month-old daughter, and they’re having some issues with her family. For example, her father went to install her child’s car seat, and he did it facing forward. And Nicole was kinda like, “Well you know, according to A&P guidelines, it actually should be rear-facing…” And her dad got all bent out of shape.

Another time her dad tried to feed Nicole’s daughter ice cream, and Nicole was like, “Whoa, whoa, whoa, whoa.” And again he felt threatened and felt like he was being judged by her.

‘What do you do in these kinds of situations?”

First let me give you a word of encouragement. It gets so much easier. The more you practice, the easier it gets.

Frankly, in the beginning, you’re kind of insecure about it, you’re still not really sure, and then the other people pick up on it, it just gets weird and ugly. Let me give you a couple of examples.

At work, people thought I was a freak show. It started when I brought my own special water to work because their filtered water wasn’t good enough for me. I have my mason jar instead of the plastic cups, and people were like, “What is that?”

I was really uncomfortable as I answered there questions, but over time I got more comfortable, more confident. More like, “This is who I am.”

Next I brought in a hot plate to heat my lunches instead of nuking them off in the microwave. So I’d use this hot plate, all the smell would waft and fill the whole entire area where I worked, and people would come around and say, “Genevive, what’s for lunch today? Herbs and twigs?” Or, you know, “What’s that green stuff?”

So yeah, I got a lot of ridicule at work

But over time, people actually started appreciating everything I did because it was just so uniquely me. So much so that, when I brought in my salt lamp that I put next to my computer and a couple of crystals, they just thought, “That’s Genevieve.”

Own it in a way that doesn’t put judgment or criticize other people and their lifestyle choices.

Let me give you an example. My parent’s house is the type of home where the TV is always on. My dad’s in the markets, and he likes to see all the numbers across the screen. The TV’s just always on, it’s just background noise.

Well, for my toddler Griffin, the TV’s like this magnet that he’s just drawn to, and I didn’t feel comfortable with that. Especially when he was under two years old. So I just told my mom when I went over there, “You know what? We really don’t want Griffin to have screen time. I’d really appreciate it if you would just play with him upstairs, or take him down the basement. Nothing personal, it’s just something that we feel really strongly about.”

Set the boundary, but don’t judge

Again, I’m owning it for myself, I’m setting the boundary, but I’m not saying, “You guys watch too much TV,” or “You need to turn that TV off,” or anything like that. I just keep it to my side of the street and stay really simple and clear with it.

Make it easy on people.

The last thing you wanna do is create a lot of work for people to fit into your lifestyle.

Let me give you an example. I sometimes take Griffin to the gym, and they’ve got a little day care center there where they serve snacks like cookies and cupcakes and things that I really don’t want Griffin to eat. So instead, what I do is bring carrots, or apple slices or a smoothie or something like that, and I just ask the attendant, “Can you give Griffin this when it’s snack time? I’d really appreciate it.” She’s like, “Sure! This is great! Oh my gosh! This looks delicious!” And it just makes her life easier.

Have a sense of humor about it

That’s what we’re trying to do here at Mama Natural. As granola moms, some of the things we do are kind of silly. It’s not really fun to spray poop off a cloth diaper, but we do it, right? So we’ve got to have some fun and laugh about it all too. That’s why we did our videos, Sh*t Crunchy Mamas Say. Be sure to check those out if you haven’t.

A sense of humor just helps deflect criticism. So I’ll just own it and have a sense of humor about it. I’ll be like, “I know I’m kinda weird, but I brought my own salad dressing to the restaurant.” Everyone can laugh, and it just adds a lightness to it all.

Truthfully, the things that are ‘weird’ are the Twinkies or the Goldfish we’re giving to our kids. That stuff didn’t even exist fifty years ago, you know?

Or with breastfeeding. Globally, the norm is to breastfeed them until they’re two or three years old. But we take flak for breastfeeding past a year?!?

Some stuff is so backwards these days. And what we’re trying to do is flip it back on its head. And have some fun with it too.

Have any of you experienced peer pressure, criticisms, or people making fun of you for trying to live healthy? How did you handle it? Share in the comments below so we can learn from each other 🙂 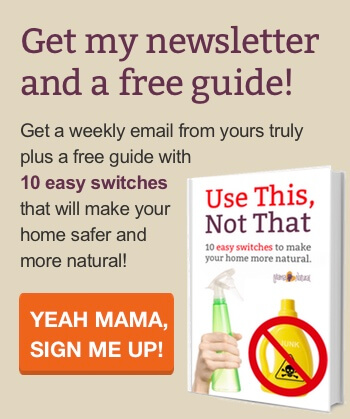