What does your cervical mucus say about your fertility? A lot, actually! Take a look at this cervical mucus chart to find out exactly when to try and get pregnant (or not). 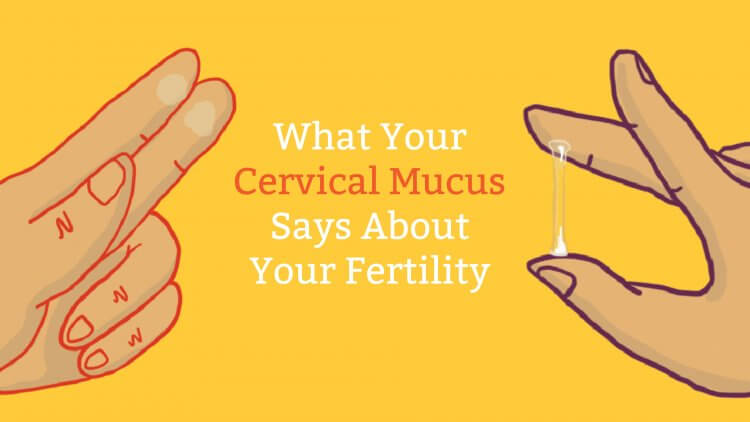 Did you know that you can tell when you’re fertile based on your cervical mucus? (Check out the chart below to learn about each phase of cervical mucus and how to use this knowledge to get pregnant!)

Mucus is right up there with moist when it comes to off-putting words, but if you can get past the ick factor, you’ll be rewarded with a beautiful way to predict fertility and ovulation naturally.

In fact, cervical mucus (CM) is one of the only signs of fertility that comes before ovulation, which is important because it’s almost too late to have sex when you’re ovulating if you want to get pregnant.

While you can track your basal body temperature and other signs to confirm ovulation, observing the different phases of cervical mucus will help you know when to make that baby.

While recording cervical mucus can be a natural, cheap, reliable, and highly effective component to avoid pregnancy using the Fertility Awareness Method (FAM) or Natural Family Planning (NFP), this post focuses on identifying your cervical mucus to help you achieve pregnancy.

Use this chart to clarify what cervical mucus looks like at different phases and when you are most fertile.

How to Check Cervical Mucus

There are three main ways to check your cervical mucus.

This is the simplest, easiest, and probably cleanest, way to check your cervical mucus. Simply look at your toilet paper after wiping. It may take a little inspecting, but as long as you’re ovulating, you’ll see it. (Bring the toilet paper to the light if need be!) Don’t be surprised to see more or less cervical mucus day-to-day or cycle-to-cycle based on multiple factors, including how hydrated you are or the way you pooped. In fact, some women only present cervical mucus after a strenuous bowel movement.

Some women have effusive enough secretions that cervical mucus appears in their underwear. (It helps if you wear black underwear!) This may be a less intimate and accurate way to observe your cycle, because cervical mucus doesn’t have to actually leave your body to “count” or be a valid, daily reading.

Checking internally can become second nature, especially if you also chart the position of your cervix as an additional sign of ovulation. That being said, your vagina has a delicately balanced pH. Usually, the vagina is slightly acidic to help kill bacteria and other potentially harmful microorganisms. As you can imagine, introducing foreign substances from bacteria or soap residue on your finger or douching can disrupt the natural balance and potentially impact fertility.

As you embark on your cervical mucus charting journey, it’s important to track your body at the same time each day. Remember that your body may differ from others and that charting is just one tool to help you get to your end goal of becoming pregnant.

The date ranges listed below are based on a 28-day cycle. Some women will ovulate earlier in the their cycle, others later. That’s why observing and charting your own cervical mucus patterns is important to determine the signs of your own ovulation.

The first days after your period are known as your dry phase. This immediately follows your period and leads up to the appearance of non-fertile cervical mucus. Dry is a relative term. Your cervix and vagina will never be completely dry, as they are moisture-filled membranes. Most women report feeling a dryness or a lack of gliding when wiping. Charting over time will clue you in to what is a “dry” day versus a cervical mucus day for you. Once you observe the difference, you’ll never know how you didn’t notice it before!

Days 4-6 After Your Period: Sticky Phase

As you move closer to ovulation, your body starts producing non-fertile cervical mucus. This is often denoted as the “sticky” phase. It is usually white or cloudy in color and forms small sticky globs. (The best, slightly graphic description is likened to slightly cooked egg whites.) It will feel sticky or gelatinous; if you wanted to roll the little globs back and forth between your fingers, they would stay intact.

So what does egg white cervical mucus mean? Despite its interesting texture, it will not support and help sperm the same way the more fertile mucus will. While it’s certainly possible to get pregnant in some cases, intercourse during the sticky period will likely not result in a positive pregnancy.

Days 7-9 After Your Period, or Pre-Ovulation: Creamy Phase

During this phase, your cervical mucus will still be creamy or cloudy in color. Additionally, it will be abundant and thick and viscous, but not as sticky. This is considered semi-fertile cervical mucus. Many women choose to have sex every other day starting with the appearance of this creamy cervical mucus. Of course, if your partner has a low sperm count or motility issues, or if your schedules make it difficult to get intimate time, don’t worry! You are still a few days from peak baby-making time and ovulation. Sperm can stay alive inside the female reproductive organs for up to 6 days, so it is possible to get pregnant during this phase.

Days 10-14 After Your Period, or Your Fertile Window: Clear Phase

For your best chances of conception, time intercourse to coincide with this phase. As your luteinizing hormone levels rise before and during ovulation, your cervical mucus will become clear, abundant, and extremely stretchy. Your cervical mucus should resemble clear, raw egg white. It will feel like stretchy slime, be slightly sticky, and odorless. If you wanted to, you could stretch it between your fingertips at least an inch, if not more.

Clear cervical mucus means your body has reached its prime fertile stage. Cervical mucus at this stage is a nurturing environment for sperm. In fact, this stretchy mucus actually creates channels that help “catapult” the sperm up into the uterus and fallopian tubes.

You may notice an increased amount a day or two before ovulation. This is the perfect time to try making a baby! You only have a 12-hour window for the sperm to be in the right place to inseminate the egg. So, having sex before ovulation ensures you’ll have those little swimmers waiting patiently to do their job. If you want to get pregnant, try to have sex every day, or every other day, you have egg white cervical mucus.

Your cervical mucus after ovulation will lessen and begin drying up almost immediately. As you wait to find out if you’re pregnant, you’ll notice subtle cervical mucus changes.

Your Cervical Mucus Before Period

Some women will notice a little creamier cervical mucus a few days before their period. As your uterus prepares to shed its lining, your cervix can push out some of this creamy discharge as a way to prepare for your menstrual cycle to begin. If you’re trying to get pregnant, know that you can also have some discharge even if you are pregnant, so don’t be discouraged!

Cervical mucus in early pregnancy is not a reliable confirmation, but some women report experiencing yellow-tinged creamy cervical mucus in the days around their missed period. This could be due to the continued presence of progesterone in early pregnancy. However, it is much more reliable to look at other signs, like a sustained increased temperature for 18 or more days past ovulation or, of course, a positive pregnancy test. If you think this may have been the lucky cycle, you might also be experiencing some weird early pregnancy symptoms.

After a cycle or two of charting, you’ll be a pro at distinguishing sticky, creamy, and egg white cervical mucus from the dry phase or arousal fluid (much more watery and slippery). Use the above information as guidelines, but remember, every woman and every cycle is unique!

Truth be told, many women don’t have a regular 28-day menstrual cycle. In fact, a “normal” menstrual cycle can be anywhere from 21 to 35 days long. Usually, women with polycystic ovary syndrome (PCOS), anovulatory cycles, perimenopause or other irregularities will see even longer cycles and longer phases in each. They might even see false peaks, where cervical mucus ramps up to pre-ovulation at various points in their cycle without actually achieving ovulation.

Some women may buzz through the phases in a matter of a few days; other women might see over two weeks of cervical mucus. This is why observing cervical mucus is an important but not all-encompassing aspect to understanding your fertility. It is essential to follow other signs to pinpoint ovulation.

If you aren’t cycling every 28 days or so, you may want to work on balancing your hormones to optimize your fertility and pregnancy journeys.

However, women will all sorts of cycles and issues from PCOS to perimenopause end up pregnant, so don’t get discouraged if you don’t have the ideal menstrual cycle.

It takes time and practice to understand your cervical mucus changes. As you observe regularly, your signs of fertility will become more and more obvious. In the meantime, don’t get stressed, as this can affect your fertility!

The most important thing is to be consistent. Check each day at the same time and log it in a journal along with your basal body temperature.

Charting Cervical Mucus Can Be Fun

It’s weird to say, but charting cervical mucus is fun. It’s easy to do, and you learn so much about your body and your fertility. There is absolutely nothing more natural than following your body’s cues and indications of fertility.

Whether you track with an app, pen and paper, or simply observe, keeping tabs on your cervical mucus can be informative, empowering, and an important key to achieving pregnancy! Hopefully, this cervical mucus chart will help you understand the different cervical mucus stages and which types are the most fertile.

What questions do you have about cervical mucus? What signs of fertility and ovulation are the strongest for you?