Linea Nigra: What IS That Dark Line? And Will It Ever Go Away?

Find out when this dark line usually appears, what it could mean, and when linea nigra disappears. Plus get natural remedies to lighten the pigmentation. 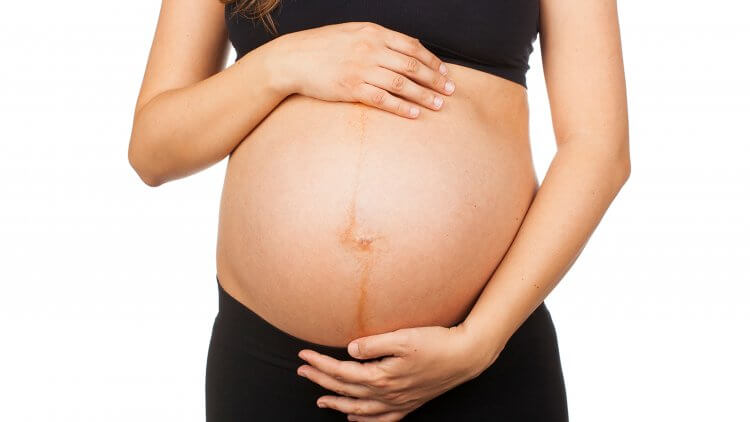 During pregnancy, your body’s once familiar landscape changes right before your eyes. Straight hair turns curly, you’re craving foods you’ve always hated, you’re burping and snoring, drooling, sweating… all of those signs of pregnancy are weird in so many ways, right? So when you look in the mirror one day, admiring your bump, and you see a dark line called the linea nigra running down your belly, it may just feel like par for the pregnancy course.

Still, you’re likely to have a lot of questions about that mysterious dark line. In this post we’ll answer:

What is Linea Nigra?

Everyone—babies, kids, men, women… all humans!—has a band called linea alba (Latin for white line) that runs down the front of the abdomen, between the belly button and pubic area. It’s just generally too light to see. When melanin production increases during pregnancy (thanks to elevated estrogen levels produced by the placenta), the linea alba gets darker and more apparent.

This is called linea nigra, and approximately 75 percent of women notice it at some point during pregnancy.

The linea nigra is generally about 1/4 inch – 1/2 inch wide and may get lighter as it extends up the belly. (source) The color, or degree of pigmentation, varies from woman to woman.

When Does Linea Nigra Appear?

Linea nigra usually begins to show up during the second trimester, or around the 5th month. It can get darker and longer as your pregnancy progresses. By the end of their pregnancy, some mamas say that their linea nigra went all the way up to the top of their belly.

But What You Probably Really Want to Know: When Does Linea Nigra Go Away?

It usually starts to fade shortly after the birth of the baby—most likely within a few months. If you’re breastfeeding, it could take longer since your body is still producing more hormones. As hormones level out, the linea nigra will fade in most women. Though, if you get pregnant again later, it will probably come back.

In rare cases, it may never fade completely. (source)

Can You Get Rid of Linea Nigra Sooner?

You can’t, and that’s OK! It’s a perfectly normal part of pregnancy, and just shows externally all the incredible things your body is doing internally to nourish and care for your baby. It’s pretty much proof of the miracle that’s happening in there, so don’t be self-conscious about it!

That said, there are a few things you can do things to lessen the contrast:

What About Bleaching Creams?

Most skin bleaching creams contain an ingredient called hydroquinone. Hydroquinone is listed as a Category C in the FDA database of drugs safe for pregnancy. Category C means they don’t really know if it’s safe for the baby in utero. There hasn’t been enough (or any) conclusive testing, so it’s not worth the risk.

How to Prevent Linea Nigra

There is no way to prevent linea nigra. Some people simply produce more melanin than others, however the following daily habits can minimize hyperpigmentation:

Larger amounts of estrogen and progesterone stimulate cells called melanocytes in your skin, causing them to produce more melanin, making skin darker in some places (including the linea nigra). Pregnant mamas may also notice darker patches of skin, as well as darkening nipples, freckles and dark patches on the face—even your vulva can darken.

A dark linea nigra is more common in people with dark skin, since they have more melanin naturally, though it can be more obvious in fair-skinned individuals due to the contrast in skin color.

Does Linea Nigra Mean It’s a Girl or a Boy?

Someone may ask you if you have a linea nigra as a way of guessing your baby’s sex. There are a ton of old wives’ tales that predict whether you’ll have a boy or a girl, but most of them are just for fun. This one is no different—in fact, people can’t even seem to agree whether the presence of a linea nigra means you’re having a boy or a girl! Some say women with any linea nigra at all will have a boy. Others says it depends on the length of the linea nigra:

I had a slight linea nigra with my son’s pregnancy and no line with my girl.

Embracing the Changes in Your Body

A dark line down your belly may seem like it shouldn’t be a big deal, but with all the other changes pregnancy throws at you, it might be hard to swallow. Try not to let it get you down. Your body is working hard, doing incredible things to care for your baby, to nurture the life growing inside you. Just like your belly, your stretch marks, and your random stray hairs and skin tags, your linea nigra is a sign that everything is going according to plan with your pregnancy. Your body is creating a miracle. ✨

Did you get linea nigra? When did it appear and when did it disappear?