Mucus Plug: Does Labor Start When You Lose it? (Photos)

What is a mucus plug? Is there a difference between mucus plug and bloody show? Here’s everything you need to know. 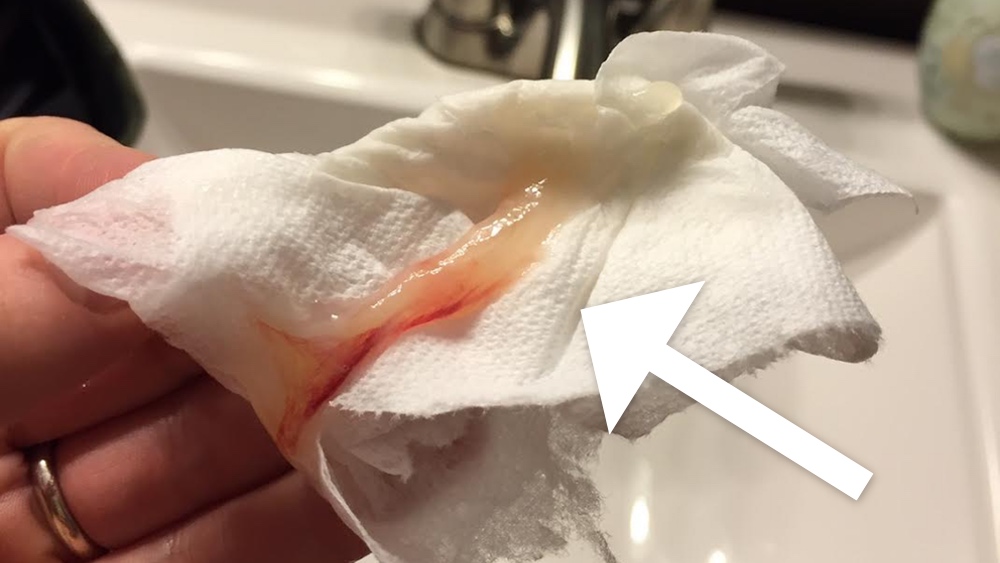 There are some parts of pregnancy that don’t get talked about much. Like lochia, the normal bleeding that occurs postpartum. Or vernix, the cheesy white substance covering a newborn’s skin. Or, of course, the mucus plug.

What is the Mucus Plug?

The mucus plug is just what it sounds like, a plug made of mucus. During pregnancy, the mucus plug develops and lodges in the cervix to block the cervical canal. Its job is to protect your uterus from unwanted bacteria and pathogens that could enter in, like from sexual activity or vaginal exams. (source)

Secretions from the cervix, and an increase in estrogen and progesterone begin to form the mucus plug early on in pregnancy, when the ovum makes it’s way to the uterus. Even though the plug lasts until the end of your pregnancy, your body is constantly creating new mucus to keep it fresh.

Still not sure what to expect? Several Mama Natural readers generously contributed these photos of their mucus plugs.

Mucus plug photo 02 Mama Natural This photo is from a mama who lost her mucus plug six hours before giving birth to her second child at 40 weeks 4 days pregnant.

Mucus plug photo 01 Mama Natural This photo is from a mama who lost her mucus plug at 38 weeks and 1 day. She went into early labor 12 hours later and delivered her baby girl 14 hours after that.

Mucus plug photo 03 Mama Natural This mama lost her mucus plug on June 24th, early in the morning, and had her daughter on June 27th just before lunch time.

How Do You Know If You’ve Lost Your Mucus Plug?

Once the baby “drops” and settles lower into the pelvis, this starts the process of the cervix opening. When the cervix begins to “ripen” and soften in preparation for labor, the mucus plug is no longer held firmly in place and falls out. These changes in the cervix can cause capillaries to burst, creating the pink tinge of the mucus plug.

The plug is commonly expelled after a trip to the powder room, or during a shower, making it difficult to observe. Because vaginal discharge is increased during pregnancy anyway, you may not even notice it at all!

How Long After You Lose Your Mucus Plug Do You Go Into Labor?

Losing your mucus plug usually means that your body is preparing for labor. It is, after all, one of the main lines of defense between your womb and the outside world. Your cervix is likely effacing, or dilating, or both to get ready for the big day. Effacement is when the cervix thins and stretches, while dilation is when it opens. (source)

How soon does labor start after you lose it?

Even though your body is showing signs of preparing for labor, don’t grab your birth bag just yet. Birth could be hours away, or it could be a few weeks away. It depends on each woman, and there is no cookie cutter answer. (source)

There really is no definite timeline here.

What to Do If/When You Lose Your Mucus Plug

Should I Call the Doctor After I lose My Mucus Plug?

If the mucus plug is accompanied by a large amount of bright red blood, about 1 Tbsp or more, that can be a cause for concern and you should contact your midwife or doctor. Because it could be a sign of complications such as placenta previa, it’s important to talk to your healthcare team right away.

Placental abruption is a rarer condition that can also cause bright red bleeding. During a placental abruption, the placenta detaches either partially or fully from the uterine wall. (source)

When Do Women Normally Lose Their Mucus Plug?

If you haven’t lost yours yet, you may be wondering when to expect it to happen. Your body typically gets rid of the plug between 37 and 42 weeks of gestation. It can even happen as late as when you are pushing baby out! (Yes, this happened to me in my 3rd birth.) Some women can lose it earlier in the pregnancy—the body will create more mucus to protect your baby.

As your body begins to prepare for delivery the cervix softens, or becomes thinner and wider, and you will naturally shed the mucus plug. Some women in late pregnancy may also lose their mucus plug—or a portion of it—after intercourse or an internal exam.

What Happens If I Lose the Plug Early?

Even though it’s an early sign of labor, the mucus plug can regenerate itself to some extent if it’s lost earlier than the 37 week mark. As long as contractions haven’t started and there’s not a lot of bright red blood, there’s typically nothing to worry about. (source)

However, if it’s lost before the 37 week period, be sure to let your midwife know so she can keep an eye on things. Losing it early on in pregnancy could indicate premature labor.

Is There an Infection Risk From Losing the Mucus Plug Early?

If you do happen to pass the plug early on in the pregnancy, it will likely regenerate. (source) Even if it doesn’t regenerate, you still have the amniotic sac surrounding the baby, protecting them from infection and pathogens.

The amniotic sac is the last line of defense between the outside world and your baby, but the mucus plug is really the heavy hitter when it comes to destroying incoming pathogens. If you’ve lost it early, healthcare providers may recommend you refrain from sexual activity. They’ll also advise you not to swim in a city pool, lake, or anywhere else that may carry a risk of infection.

Is There a Difference Between Mucus Plug and Bloody Show?

While the mucus plug can be slightly pink or even have streaks of blood in it, it is not necessarily the same thing as bloody show. (source)

So to review, the mucus plug:

My Experience With the Mucus Plug

In my first pregnancy, I lost my mucus plug and didn’t know what it was. For me, it was very liquidy and mostly clear. I woke up and felt like I peed in my pants. I assumed my water broke, so I went into the midwives office. She tested the pH and told me that it was the plug. My labor began 12 hours later. (BTW, I never saw the bloody show.)

With my second birth, I never saw a mucus plug or bloody show.

With my third birth, the plug shot out while I was pushing! Yes, the first time I pushed, I pushed that thing out. It looked like the popular kids’ “slime.” It was an opaque color with hints of pink and red. Right before that, I saw the bloody show and my water broke.

Other Natural Mamas’ Experience With the Mucus Plug

I asked the moms on my Facebook page to share when they lost their mucus plug and whether labor started shortly after. Here are some of their responses.

How did you lose your mucus plug during pregnancy? Let us know in the comments below! Cynthia Mason, CNM, APN, MSN is a Certified Nurse Midwife who has attended more than five hundred births. She works in Regional Obstetrics and Gynecology for Cleveland Clinic.